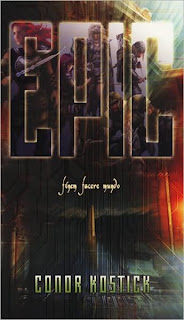 Epic by Connor Kostick
Imagine a world where violence of any kind has been banned and is punishable by complete exile. Instead, all disputes are settled in the immersive experience of Epic, a role-playing video game that all citizens of New Earth play to determine wealth and status in everyday real life. The problem? A.corrupt group called Central Allocations has all the points and all the power, leaving families like Erik's without sun panels and extra food and clothes while they toil at hard labor for minimal resources.
With a group of friends, Erik decides to find the flaws in Epic and use them to excel in the game, battling dragons and voyaging to far off lands for wealth and experience. When his father is exiled for a past crime, Erik does all he can to find leverage against Central Allocations to get him back--no easy feat!

Full of beautiful, detailed imagery, Epic is a great ride with something for everyone, a thoroughly developed, well-written exploration of virtual reality and the morality behind many laws and regulations. Though it's science fiction, it has the feel of fantasy, and it's easy to get caught up in the action and excitement of Erik's real world as well as his role-playing one. It also joins the literary tradition of science-fiction books featuring humans in a search for a better way to live on a new, safer planet. Recommended for fans of Orson Scott Card's new book Pathfinder, among others.

Saga, the second in the trilogy, is out in paperback. Edda, the third book, is due to be published August 4, 2011.

Yet Another (Good!) Dystopian Romance 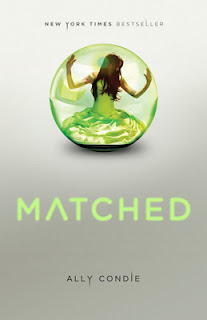 What if everything you knew was chosen for you--food, clothing, music, career, even a spouse?
Cassia is an ordinary girl living an everyday life in the Society, a "perfect" community run through predetermination. Everything is determined by Society Officials based on statistics and probability. Efficiency and equality are the goals, and choice has been taken out of almost every equation. It is the path humanity has taken for the sake of safety, as the border wars outside Society's limits clearly show, and Cassia has no qualms with the choices made for her. Until, that is, the night of her Match Banquet...
When Cassia catches a glitch in her Match microchip and sees the face of not one but two possible romantic matches, she knows something must be wrong. Suddenly everything is up in the air, and the questions start to grow. As her perfect image of the Society starts to fracture, Cassia discovers the beauty and strength in forbidden knowledge and the ability to choose, and her small internal struggle to remain balanced becomes an overwhelming external need to live her own life.
When you mix ideas and images from a bunch of classic dystopian and "perfect society" novels like Fahrenheit 451 (Bradbury), The Giver (Lowry), and 1984 (Orwell)--and then throw in some contemporary favorites like Scott Westerfeld's Uglies series--it's hard not to have a hit. Throw in a love triangle to rival Katniss, Peeta, and Gale from The Hunger Games and you've got a bestseller on your hands (see the NYTimes list). It's a solid and enjoyable page-turner, and as only the first in a trilogy, it should go far by publishing standards. Definitely recommended for fans of today's futuristic, dystopian sub-genre, especially with the promise of more action and star-crossed romance to come!
The sequel, Crossed,  is set to be published on November 1, 2011.

The Magician's Elephant by Kate DiCamillo

In the timeless city of Baltese, ten-year-old Peter Augustus Duchene is on his way to the market to purchase a meager meal for himself and his guardian, Vilna Lutz, when he is sidetracked by a sign advertised by a fortuneteller. "The most profound and difficult questions that could possibly be posed by the human mind or heart will be answered within for the price of one florit." He makes a decision to ask her how to find his sister. The fortuneteller tells him to follow the elephant. With that inexplicable answer the magical journey truly begins. 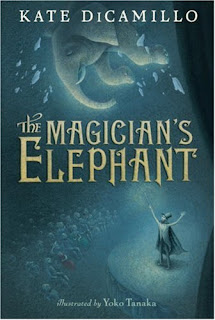 With Peter's question events are set in motion that will involve others in his quest, a quest that will lead others to their own desired wishes. A beautifully written story that captures the imagination of the heart. Peter's intense belief that his sister is still alive and his journey to find the answers, against all the possibilities of finding an elephant is the heart of this story. Very atmospheric storytelling, this is DiCamillo at her best.
-Ruby


Maybe I liked this book because it reminded me of my grandparents, but I'm pretty sure I also just really, really enjoyed it. 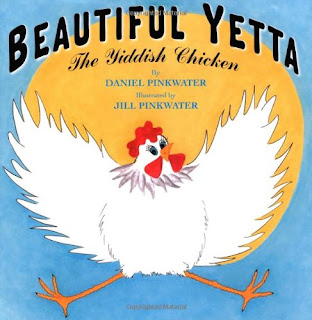 Beautiful Yetta is the multi-lingual story of a chicken who has escaped a fate at the butchers only to end up lost on the streets of Brooklyn, much different from her normal farm life. Initially ostracized by rats and pigeons, Yetta saves a wild parrot from a cat and becomes a welcome member of the parrot colony.
The story is unique as each character speaks their own language (Yiddish, Spanish, and English) with accompanying phonetic spellings for Hebrew and Spanish characters as well as English translations. (A phonetic Hebrew and Yiddish alphabet chart is included, presumably for adults, on the last page.) It's a great way to introduce young children to other cultures and languages, though as Daniel Pinkwater says, "it doesn't mean to be a Rosetta Stone," Colorful and geometric illustrations, which often take the place of narration, are important to the progression of the plot, and the bright images fit well with the lively narrative as it flits back and forth from one language to another.
If this book is up your alley, be sure to check out a recording of Pinkwater reading Beautiful Yetta aloud, complete with accents and laughter, on NPR's Weekend Edition (August 14, 2010).

Not All Books Are Created Equal

You know that feeling you get when you see a book with a topic that interests you and it has a beautiful cover? And you think, Wow, this could be a really comprehensive but visually interesting piece of media through which kids could learn? And then you open the pages with heightened anticipation, only to find upon closer observation that it really isn't very good at all? 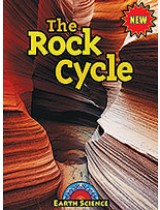 Okay, so maybe it's just me. Regardless, here's a book that fell far short of my hopes, dreams, and expectations. (Be sure to take this all with a grain of salt as I love geology--my standards are perhaps a bit high and my criticism perhaps a bit harsh. Maybe.)
Earth Science -- The Rock Cycle published by AV2 (WEIGL) is one of many non-fiction titles that the company has published for "bridging the gap between print and digital." That's all well and good, but in order for that "bridge" to be succesful, the print version has to be well organized and comprehensive, two things that The Rock Cycle is not.


This book attempts to introduce an unfamiliar audience with the rock cycle and the processes that accompany it. Though the information included is accurate and thorough, and the photographs are vivid and catching, the overall organization is extremely poor, making it difficult for readers to process. Bolded terms throughout the text are listed in the back as 'Words to Know,' but while basic words such as 'dense' and 'adapt' are included, important geologic terms mentioned in the text itself are excluded, such as 'metamorphic' and 'uniformitarianism.' In the text, shorter sentences break up the information, though a lot of new terms are occasionally packed into a small space, making a strong index a valuable commodity. Images do not always match the text well, and some vocabulary words are introduced early on, far before their definitions or first contextual usage appear. Overall this book could benefit from selective emphasis on additional terms as well as bullet points or lists mixed into paragraphs to help break down ideas.
The book-to-internet use is a nice concept, I'll give them that. A science experiement in the back, along with a list of (rather useless) random facts and study questions, allow for student interaction in addition to online content. If you're a school librarian looking for supplemental materials, at the least the facts included are sound. If, however, you're looking for a great, grand, exciting, and easy-to-follow introduction to the rock cycle, you're much better off elsewhere. (Note: I can't speak for the other books in the series as I haven't read them yet.)
-Jenny
Age 8+
Copyright 2011
ISBN: 9781605969671
Image from www.weigl.com
Posted by Ruby and Jenny: Partners in Crime at 3:46 PM No comments:

Email ThisBlogThis!Share to TwitterShare to FacebookShare to Pinterest
Labels: geology

Not Your Average Princess 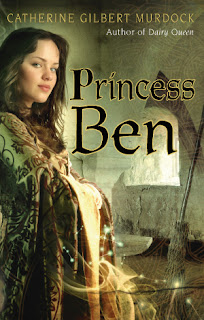 Princess Ben by Catherine Gilbert Murdock
Princess Benevolence—nicknamed Ben—is a stocky, stubborn, and intelligent girl. When tragedy strikes and her parents are assassinated, Ben, as the only heir to the throne, must move into the palace with her strict, controlling aunt. Beaten, abused, and locked in the tallest tower, Ben is miserable until the night she discovers a hidden room and learns the magic that can set her free. It's just the beginning of her journey as she realizes her country is about to be invaded by a bordering nation. From detestable dance lessons and embroidery to a trek through frigid mountain tops and enslavement at the enemy camp, Ben must survive dismal tasks and epic adventures, all the while maturing into the strong leader her people need her to be.
Here there be dragons, princes, princesses, flying broomsticks, magical tomes, and a snarky back-and-forth romance between Ben and the enemy's Prince Florian. Fans of Gail Carson Levine's Ella Enchanted will love Ben and her determined, progressive attitude, and the adventures and mystical situations she finds herself in will captivate readers. Princess Ben kept me up until the wee hours of the morning, needing to know just how she was going to save the day. Murdock's writing is fluid, smart, and compelling, making this book a great fantasy read, especially for lovers of the twisted princess fairy tale genre.
-Jenny
Age 11+
Copyright 2008
ISBN: 9780547223254
Available as an eBook.
Image from www.panmacmillan.com.au
Posted by Ruby and Jenny: Partners in Crime at 11:19 PM No comments:

If you're here, that means we have readers--exciting!

Welcome to "Our Time in Juvie" where your fabulous (and humble) hosts Ruby and Jenny share their unasked-for thoughts on this and that in children's and young adult literature. Whether it's vampires or middle-school boys, post-apocalyptic war time or a Medieval romance, we've got it covered. Between the two of us we fly through a lot of titles, so it should be a fun, rambling ride for all.

In addition to reviews on books old and new, we have a list of recommendations on the top of our page based on specific interests.

Don't see a title you think we'd enjoy? Let us know! Curious about a specific book and hoping for a more detailed recommendation? Send us an e-mail! We're always looking for little-known authors and titles to try, and we know how hard it can be to keep up with a kid's reading demands.

Happy reading to all!

Jenny
Posted by Ruby and Jenny: Partners in Crime at 1:14 AM 1 comment: