A fun twist on a classic tale...

Meet Josephine-Kathryn Smith, aka Cinderella Smith. She's nothing like the Cinderella from the classic fairy tale. No wicked stepsisters. No wicked stepmother. There's a prince...Charlie Prince, a next door neighbor who likes to tease her. The only thing she has in common with the fairy tale Cinderella is that she's always losing her shoes.

As a new school year starts, her best friend from last year is ignoring her, and she loses the most important shoe of the year...her tap shoe. With the fall dance recital coming up and the starring role of Pumpkin Blossom Fairy up in the air, Cinderella must find that shoe. 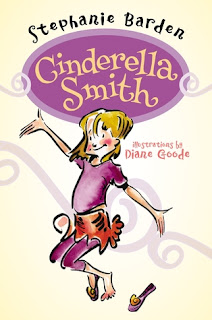 Since her former best friend, Rosemary, has moved on to "better" things, Cinderella befriends the new girl, Erin. Now, Erin has a problem that she thinks Cinderella can solve. Erin's about to get two stepsisters when her mother remarries, and Erin is worried that they might be wicked. However, Cinderella has no experience with stepsisters, wicked or otherwise, so Cinderella comes up with a unique and hilarious way to find out.

This is a great new series for fans of Ivy + Bean (Barrows), Clementine (Pennypacker), Just Grace (Harper), and Ramona (Cleary). Each of these series has unique, spunky, fun, intelligent, hilarious girls at their center. Cinderella Smith can join the club. Barden has created a character that is in high demand with my readers. With the unique fairy tale twist (which is a popular genre), she has crafted a story to be read aloud again and again. Each chapter of the book is the featured shoe of the moment. I never had a problem with losing shoes, I just wore them until they fell apart, much to my mum's dismay. She would always buy me new shoes, but I loved the old, holey, comfortable ones.

Stephanie Barden came into my children's department yesterday, which absolutely made my day. I was telling a co-worker about her book not 20 minutes before. I was disappointed that I wasn't able to make it to an event she had at another bookstore. Now, sometime this summer we'll have her for an event at our store! Definitely looking forward to that.

Be on the look out for more shoe-less adventures in Cinderella Smith and the More the Merrier coming out in 2012.